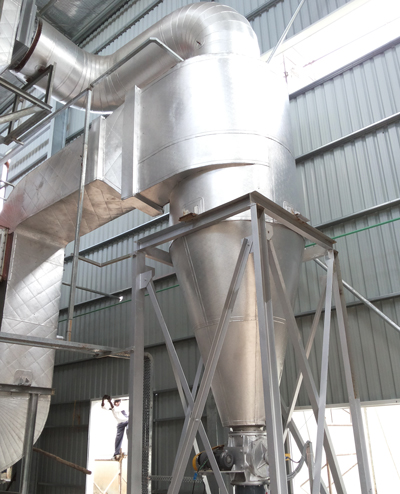 Cyclonic separation is a method of removing particulates from an air, gas or liquid stream, without the use of filters, through vortex separation. Rotational effects and gravity are used to separate mixtures of solids and fluids. The method can also be used to separate fine droplets of liquid from a gaseous stream.

A high speed rotating air flow is established within a cylindrical or conical container called a cyclone. Air flows in a helical pattern, beginning at the top (wide end) of the cyclone and ending at the bottom (narrow) end before exiting the cyclone in a straight stream through the center of the cyclone and out the top.

Larger (denser) particles in the rotating stream have too much inertia to follow the tight curve of the stream, and strike the outside wall, then falling to the bottom of the cyclone where they can be removed. In a conical system, as the rotating flow moves towards the narrow end of the cyclone, the rotational radius of the stream is reduced, thus separating smaller and smaller particles. 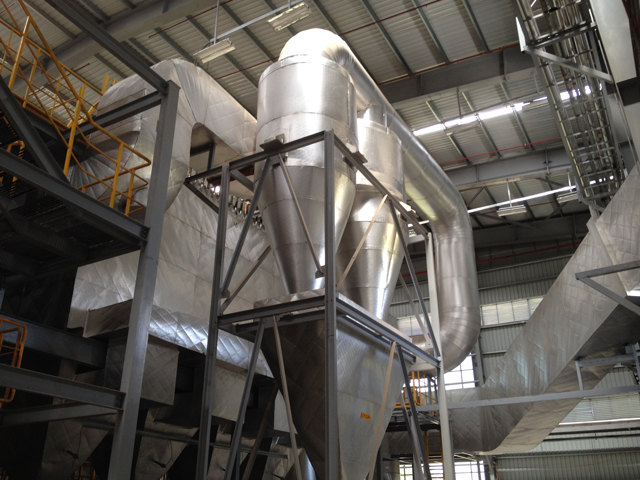 Multi-Cyclones consist of two or more set of cyclones. This set of cyclones is placed in one gas stream to obtain higher cleaning efficiency than that of single cyclone.

The gas stream is divided into two separate streams of gas and the combined in one single stream at the outlet. Multi-cyclones are preferred over single cyclones where higher efficiency is required. 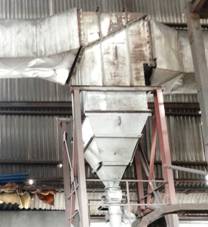 Multi-clone separators consist of a number of small diameter cyclones, operating in parallel and having a common gas inlet and outlet, as shown in the figure, and operate on the same principle as single cyclone separators creating an outer downward vortex and an ascending inner vortex.

Ecomak, for more than 30 years, has helped customers achieve their sustainability goals and protect the environment by providing cutting edge, reliable integrated solutions.
Read more About Us.

Ecomak offers a wide range of equipment and solutions for your plant needs. We help you achieve profitable and sustainable production.
Read more about our Equipment & Solutions.

Customer satisfaction is the primary objective in any of our service offering at Ecomak. We pride ourselves at being able to go above-and-beyond the call of duty to assist our customer achieve their goals.
Read more about our Services.

By continuing to browse this site, you agree to our use of cookies.